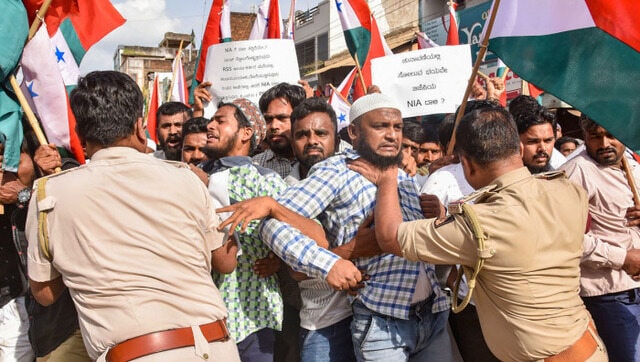 New Delhi: The Popular Front of India’s 12-hour-strike ended on Friday at 6 pm with over 500 of their members arrested across the country, vehicles vandalised, officers injured, a petrol bomb being hurled at the RSS office in Mattannur and war of words breaking out between political parties. Here’s a look at how the day panned out:

As many as 500 people were arrested and 400 others put under preventive detention in Kerala. Additional Director General of Police (ADGP), law and order, Vijay Sakhare told ANI, “500 people have been arrested and 400 more have been put under preventive detention in connection with the hartal called by the PFI.”  “In another case, two persons on motorcycle with a bomb were arrested. Three more people were arrested later. All the five have been arrested. Currently, the situation is normal and under control,” Sakhare added.

In Pune, more than 35 PFI members were detained for protesting outside the Pune district collectorate against the nationwide raids on the outfit by the National Investigation Agency a day earlier.

Meanwhile, in Bengaluru 14 people were arrested on charges of sedition.  In a statement, the Bengaluru city police said the 14 people were booked at Kadugondanahalli police station under several sections of the Indian Penal Code, including that on waging a war against the country. While two persons were from Bengaluru, the remaining 12 are from various parts of Karnataka. They will be produced before a magistrate, the police said.

Similarly, in Udupi, police booked 11 PFI activists under the charges of staging a road blockade.

Kerala State Road Transport buses, freight lorries and airport vehicles were widely attacked and pelted with stones across the state. Even an ambulance was not spared in Thrissur district.

At least 50 KSRTC buses were damaged with their windscreens smashed and seats damaged. Over 10 of its employees suffered injuries in the stone-pelting and related incidents, official sources said.

One of the many damaged KSRTC buses. ANI

The KSRTC management put out a Facebook post against the attack on its buses, and the drivers could be seen plying the vehicles wearing helmets in many places to escape from the stone-pelting. Besides KSRTC employees, police personnel, some bus and lorry drivers and commuters suffered injuries in various incidents.

In Erattupetta town of Kottayam district, police had to resort to lathi-charge to disperse activists supporting the hartal when they tried to block vehicles after gathering in large numbers, closed the shops and threatened the people who were travelling in private vehicles.

A hartal supporter allegedly hit two police personnel, who were on patrol duty, with his motorcycle when they tried to stop him from abusing commuters at Pallimukku in Kollam.
Though he managed to escape from the spot, a manhunt is on to nab him, police said.

A lottery shop, kept open at Sankranthi Kavala in Kottayam, was destroyed by miscreants while some freight lorries, which were on their way from Mangaluru, were stopped and their keys snatched away by them on a national highway in Kannur which blocked traffic in the area.

Local media reported that a petrol bomb was hurled at a vehicle which was carrying newspapers for distribution at Narayanpara and a country-made bomb was thrown at a local BJP office in Mattannoor by unidentified persons- both in Kannur district.

“They attacked us deliberately with an intention to destroy the lorry. The vehicle was parked on the roadside when they came and attacked it. I went to a private hospital for first aid and now I am going to the government hospital for a detailed check-up,” he said.

In Kannur, a group of PFI activists were beaten up by local people when they tried to forcefully down the shutters of shops. One of them was handed over to the police at the Central Bazar in Payyannur.

PFI – SDPI tried to enforce a hartal in Kannur by threatening shopkeepers.

The end result? They got badly beaten up by locals and shopkeepers. All PFI goons were then handed over to the Kerala Police. pic.twitter.com/tQPT4jnACc

As the hartal progressed throughout, so did arguments between parties. Delhi BJP leader Kapil Mishra said that the Congress halted its ‘Bharat Jodo Yatra’ on Friday as the PFI had called for a strike in Kerala.

“PFI and Islamic jihadist organisations today gave a call for strike and Congress halted its Padyatra (march). Nothing can be more petty and shameful,” Mishra, a former minister of the AAP-led Delhi government and now a firebrand leader of the Delhi BJP, said in a Hindi tweet.

Taking a dig at Mishra, Khera asked him if it is true that RSS head Mohan Bhagwat, who recently reached out to the Muslim community, was to embark on a march to seek apology from the PFI.

“There is one day break each week in this Bharat Jodo Yatra. The last break was on 15th (Sept). Now tell if it is true that Mohan ji Bhagwat is to set off on a march to seek apology from PFI (PFI se maafi mango yatra),” Khera replied back in a Hindi tweet.

Strongly condemn the widespread attack on the general public by PFI terrorists. These anti-national elements attacked even police officers,pilgrimage vehicles, KSRTC buses. Why @TheKeralaPolice not taking stringent action against the perpetrators? Is it a state-sponsored hartal?

On the other hand, Muslim cleric Maulana Sajid Rashidi dubbed the NIA’s nationwide crackdown against the PFI a “conspiracy to finish Muslims”.

The Kerala High Court on Friday said the PFI hartal was prima facie contempt of court since it went against a 2019 order passed by it on such protests.

Justice A K Jayasankaran Nambiar said despite its 2019 order, a call for a flash hartal was made on Thursday by the PFI. It was an “illegal” hartal.

The court took suo motu action against PFI and its state general secretary over declaring hartal in Kerala.

“The action of the aforementioned persons in calling for the hartal without following the procedure contemplated in our earlier order, prima facie, amounts to contempt of the directions of this Court in the order aforementioned,” the judge observed.

Initiating suo motu case, the court issued directions to the police to ensure adequate measures to prevent any damage or destruction to public and private property of those who do not support the call for hartal.

Cause for the hartal

In a massive crackdown on the PFI, multi-agency teams spearheaded by the NIA had, on Thursday, arrested 106 leaders and activists of the radical Islamic outfit in near simultaneous raids in 15 states for allegedly supporting terror activities in the country.

The searches were conducted at multiple locations in the largest ever investigation process till date. The operation started late in the night around 1 am and learnt to be concluded by 5 am involving over 1,500 personnel of state police, Central Armed Police Forces and officers of NIA and ED.

The PFI was launched in Kerala in 2006 after merging three Muslim organisations floated after the Babri Masjid demolition in 1992 – the National Development Front of Kerala, Karnataka Forum for Dignity and Manitha Neethi Pasari of Tamil Nadu. After the demolition of the Babri mosque, many fringe outfits had surfaced in south India and PFI was formed after merging some of them.

With input from agencies

Muslim organisation or terror outfit? What is the PFI and how has it grown in India?

Is the PFI a gateway to Islamic State and other terror outfits?

PFI raided: All you need to know about NIA, ED’s pan-India crackdown

News18 Exclusive: ‘PFI must be decimated,’ says Kerala professor whose hand was chopped off by radical Islamist group